There is a name I have come across several times in the past couple of weeks.  Taiye Selasi.  She first caught my attention when I caught a glimpse of her on Melissa Harris Perry’s show.  She started talking about how she had to breakup with her ex-boyfriend because the relationship was actually hindering her ability to finish her novel. She had fallen “absolutely in love with absolutely the wrong person.” I was like, Taiye!  You should read my book!  It’s not published yet or even written—but you’re my target audience! The segment ended and I turned back to whatever I was doing.

A couple of days later, I was looking at my blog stats and discovered someone had landed on illegalwriting by googling “Taiye Selasi NPR.”  I was like, what?  It turns out Ebony had already told me I need to know about this girl, and I had blogged about it (and forgot about it!) Sad, but true.  Finally last weekend, I found myself reading about her in Vogue.  At that point,  I was like—who is this woman, and how did she find such a great publicist?

My friends, Taiye Selasi is a Yale grad and author of the book “Ghana Must Go.”  I’m thinking part of the reason her first novel is getting SO much attention is that she’s buddies with Toni Morrison, who endorsed her writing.  I’m sure I’ll end up purchasing this book at some point, but I honestly have mixed feelings about the endorsement.  On the one hand, it’s Toni Morrison. We can all probably be confident that Taiye is a brilliant writer, and I’m sure the connection helped get her book published in 15 COUNTRIES.  On the other hand, Toni Morrison, it is my belief, writes to be studied.  I think even more so than to be enjoyed.  So it makes me wonder—what kind of book is Taiye’s?  I’d like to know because honestly, I’m trying to relax when I read novels—not work!

It turns out I could have asked Taiye myself last Friday at her book signing here in D.C.  If only I had decided to look into this a few days earlier!! New York peeps, she’s coming your way next week (details here).  If you’ve read “Ghana Must Go” please let me know how it is.  Holllerr. 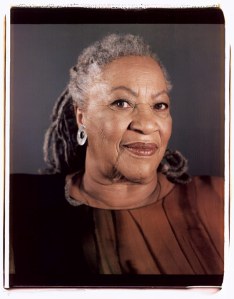 The untouchable 81-year-old Toni Morrison will be signing copies of her new novel, “Home,” at Politics & Prose tomorrow, May 17, at 4pm.  I would go, except I can’t just leave in the middle of the day.  Well, I could–but not now that I’m blogging about it.

For the record, in my noveling pursuit I’m not trying to be like Toni Morrison.  In fact, she would probably not like whatever I end up producing.  While I appreciate intellectuals and academics, Morrison is so high brow, I’m get a headache just thinking about any attempt to try to emulate her.

What people need to understand about Toni Morrison (and I admit, I learned this from New York magazine), is that Toni Morrison is more like William Faulkner (a Great American Author) than, say Alice Walker (described as a Great African American Author or, alternatively, a Great Female Author, or worse, a Great African American Female Author).  I had heard somewhere that Morrison basically hated Terry McMillan (Waiting to Exhale author–can you find her books in my header photo??) but I didn’t realize until recently that she basically sees herself as above all black writers.  Maybe Morrison just wants to transcend the label—in other words, she just wants to be known as an accomplished writer, rather than an accomplished black writer.  To be honest, that’s my goal with my Lady Lit novel, and if Toni hasn’t been able to get past the label, I wonder if anyone ever will.  In college, I actually wrote my senior thesis about The Human Stain by Philip Roth.  It was about a brilliant, arrogant academic who was so light he could “pass” as a white, Jewish man in the 1940s.  I concluded that the reason he chose to be white and Jewish (during a time where I found evidence of lots of prejudice against Jews) was that it enabled to be viewed as a Brilliant Professor without being qualified by his ethnicity the way he most certainly would have been if people had known he was black.  I actually referred to Morrison’s book “Playing in the Dark: Whiteness and the Literary Imagination,” in which she explains how all American fiction is influenced by African Americans.  I mean, all American life is influenced by African Americans because African Americans…are American (as Obama is constantly trying to convince everyone).

You see how I had to go all the way back to my senior thesis to even discuss Toni Morrison? High brow.  Anyway, I haven’t read “Home” but below is what I learned about Toni Morrison from New York Magazine:

What’s your favorite Toni Morrison novel?  Have you met her or taken a class with her?  Will her legacy be Great American Author or Great African American Author?