I haven’t done one of these for a while. A post for my little series: “He/She Did, So Why Can’t I?” about professional people who wrote novels on the side. In fact, I wasn’t going to write one this week either because I haven’t updated the world on my progress for a while, but then something happened—

I received an invitation to meet my idol.

Literally, she is the person I’m trying to be—a black female lawyer who wrote her first novel at a law firm. Now she’s General Counsel (for the Office of the Attorney General – D.C. Youth Rehabilitation Services) writing her second novel.
Her name is Dionne Peart and her book is Somerset Grove. 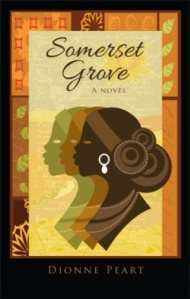 A reader of this blog gave me the heads up that she would be speaking at the GWAC—a network of African-American female attorneys— general body meeting a few blocks away from my job, so of course I had to go. I was a bit late, but when I walked in Dionne was telling a story about a client/writer who made her think, “hey, if this woman followed her passion and wrote a book—why can’t I?”

She also asked herself, “what would I do if I knew I wouldn’t fail?” Both questions led her to sit down and write a novel about three generations of Jamaican women.  The book has three POVs and takes place in both Canada and Jamaica.

Of course after all of that, I listened very closely, and this is what she said:

On finding the time:
Dionne said she woke up early everyday to knock the novel out. She tried to dedicate an hour to the book, but sometimes only ended up writing for 15 minutes. What I took from this was that when something’s your passion you find a way to make time for it in your schedule. Even if you’re an associate. Even if you’re General Counsel.

On writing:
After getting stuck at 20,000 words, Dionne attended a writer’s conference, which led her to change her strategy. Instead of writing, editing, and revising, she just wrote. The goal was 80,000 words and she didn’t look back until she met it. It took her about 2-3 years to finish.

On publishing:
Self published. Nowadays, she said, the big publishing companies essentially make you market the book yourself. If that’s the case, why give them such a big piece of the pie? She worked with an editor to get the book in publishable shape and then went for it. The hardest part? Finding the right person to do the cover art!

On lawyering:
How did she self-publish? She just formed her own corporation, easy! And the copyright? She just did it herself—didn’t take too long.

For most of the meeting, it was just like any other book signing—until she said the above. You can’t get away with saying forming a corporation is easy to anyone but lawyers! As a corporate lawyer, I will say, yes it is actually is pretty easy. But only other lawyers will believe me.

I also loved that she said she had a book signing at her old law firm and the managing partner bought drinks for everyone—awesome! 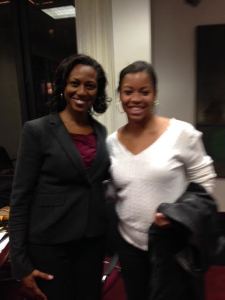 I left with a book, picture and a business card. I’m meeting with her in a couple of weeks to learn more about both her jobs. I love hearing about people who have managed to write a novel while maintaining a full-time job because if they can do it—why can’t I??

One thought on “She Did It, So Why Can’t I? General Counsel Dionne Peart”