I remember when I first learned about Terry McMillan. I must have been 8 or 9 years old, and my Mom was so excited about this book called “Waiting to Exhale.” It was summer, and apparently all the “mothers” were reading it.  It truly felt like a must-read–I mean like, you better read this book or you can’t come to my party type of the thing.  Anyway, years later, I picked it up and read it myself.  Then I found another Terry McMillan book my mom’s shelf, so I read that. Then I found another one and another one–my mom must have just bought all of them! After that, every time I heard Terry had a book coming out I just bought it. Most recently that was “Getting to Happy” the sequel to “Waiting to Exhale.”  Given my initial introduction to Terry’s books, the book signing I attended on Saturday at Sixth & I felt very different the ones I attended for Jennifer Weiner and Emily Giffin. It had a familial vibe even though I didn’t actually know anyone. Many of the audience members reminded me of my Mom and her friends and I can’t help but think that if the event had been in New York I would have, at the very least, run into a couple of them.

But back to the signing. I have to say Terry McMillan was an interesting character. She had a huge red fro and thick white glasses, and didn’t just read from her upcoming book—she basically acted it out. Afterwards, this GW professor sat and asked her some questions. Terry was funny and frank, although not the best speaker I’ve heard (Jennifer Weiner still wins that contest). Terry seemed like someone who preferred to express herself on paper, which I liked because I get that. It was like whenever someone asked a question, she had so much to say but had trouble getting it all out correctly. But she didn’t try to placate us, she gave authentic, genuine, funny answers.

I, of course, asked a question. Terry had said her latest book had 15 points of view, including one from an 8 year old boy, so I asked her how she got in the minds of people so unlike herself.  She basically said that it requires a certain degree of compassion and empathy. You have to put yourself in someone else’s shoes. To further make her point she said, “I’ve never been a crackhead, but now I know what it’s like to be one” (because she’s written about one and presumably put herself in one’s shoes) and “I’ve never been in jail, but I know what it’s like now.” Basically you have to listen to how people talk around you and then just imagine. It’s important to get lost when you write. Words of wisdom from Terry Mcmillan people. Awesome.

Other interesting tidbits: Terry knows everything about her characters before she starts writing– their birthdays, their views on abortion, whether they pay their bills on time–and most of it never makes it the story. She also discussed her views on the publishing world.  She thinks it’s pretty messed up right now because of the economy, sexism and racism. Still, she told us writers not to be discouraged, but not to quit our day jobs. Word.

In the end, Terry McMillan signed my book. She remembered that I was the “girl with the low voice” (I just wasn’t speaking into the microphone!) and seemed to enjoy being around her fans. Overall, I would describe it as an inspiring night with one of my favorite authors. Time to get back to writing (and my day job!) 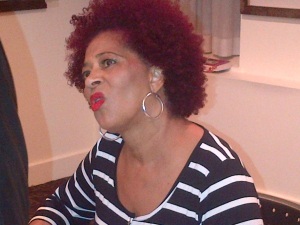 UPDATE: I tweeted this blog post to Terry McMillan and she replied!!!  She said “Thank you. Very thoughtful. I’ll try to be more eloquent. Not really! I call it the way it comes out. Best to you & your Mom!”  Lol.  I said “No, don’t be. I loved it! Thanks for coming to D.C.!” 🙂  Omg, I love Twitter!!

4 thoughts on “My Evening with “Waiting to Exhale” Author Terry McMillan SUPER UPDATE AT THE END!”